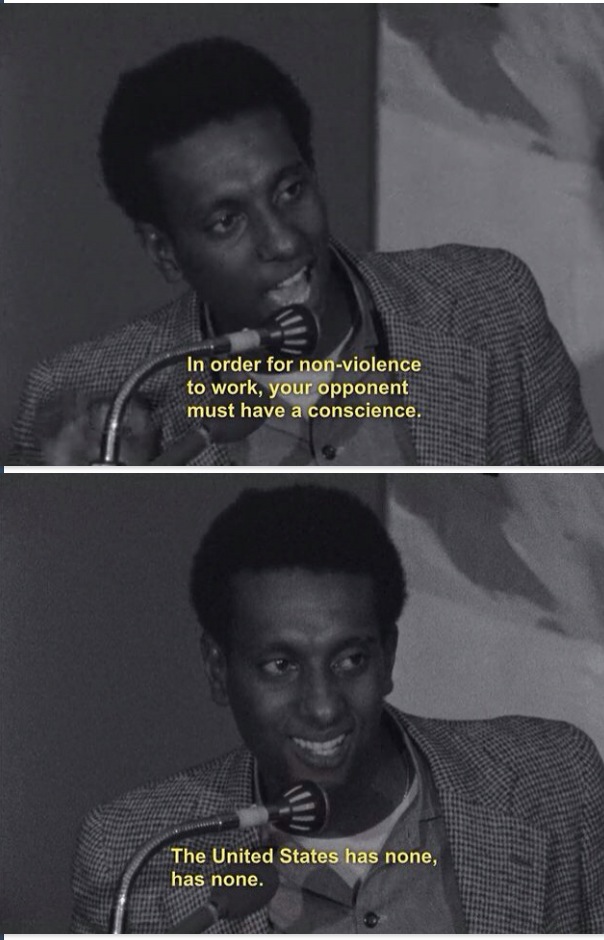 I didn’t write this to act like a reporter or get people to read my blog or whatever else reason you assumed. I am writing this on behalf of myself and others to say WE ARE FED THE FUCK UP. How much more are we supposed to take? The brainwashing, the ridicule, the injustice, the lack of empathy, etc. is a lot for any human being but seeing as though we’re not considered humans to those that hate us…I guess they didn’t notice the anger building up. We kept calm for Trayvon Martin, Oscar Grant, Sean Bell, Ramarley Graham, Eric Garner, Wendell Allen, Darius Simmons, AND John Crawford. All whose lives were considered disposable, and worthless. There are those that will continue to pray for justice then there are those that will take it. People believe they can only be strong for so fucking long before retaliation show its head. Violence is usually plan B, but to some, being deemed less than a man, equivalent to an animal, and harassed because you have more melanin than the next person is enough to make someone become the very fucking beast oppressors have always been scared of.

I watched the protest live on Ustream then I watched the news for the first time today. Why is it even legal for the news to spread wrong information? That’s such a fucking insult to our intelligence. They want to control our thoughts, beliefs, ideas, etc. They believe if they only show us what they want us to know, it’ll be all we know. Totally forgetting that the greatest mistake they’ve ever made was underestimating us. My perception of the protest in Ferguson is far more different than the perception of those who’ve been following it via news channels. I was able to witness the tear gas. I was able to witness the sound things that can damage your eardrums (sorry, idk what they’re called), I was able to witness the police advancing on a peaceful, unarmed crowd to create violence. I was able to witness all of that and NONE of it came from the tv. They shoot us but they dont want us to “shoot” them. As I watched on Ustream, I heard the police demand the protestors to turn off all phones/cameras. What other reason than not wanting their fucking inhumane behavior recorded and documented would there be for demanding that? Why did they throw tear gas then take the injured reporters’ equipment? Because they didn’t want their fucking inhumane behavior recorded and documented. Bad enough someone recorded them killing Mike Brown while his hands were up because now they just might not be able to label this one as the thug that fights authority. “Nothing in the world is more dangerous than sincere ignorance and conscientious stupidity.” The officers in Ferguson, and those that practice racism everywhere are suffering from sincere ignorance and stupidity that they are aware of. This is what leads to killing an unarmed teen. This is what leads to going into the wrong house and pepper spraying a 4 year old. This is what leads to putting 50 bullets in a man before his wedding day when you don’t even put 50 bullets in a dog. This is what leads to a boy dying because of loud music. This is what leads to an asthmatic man dying after being put in a chokehold by police. & This will continue to happen when those that are sincerely ignorant or fully aware of their stupidity but choose not to learn are the ones that have been chosen to “lead and protect.” Fuck boy cops have only been leading us to one thing: our very own death. 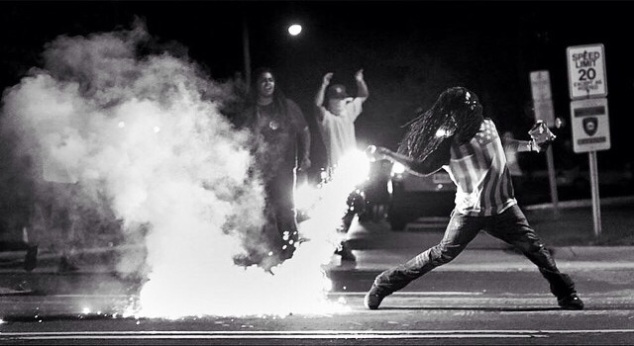 When Trayvon Martin was killed, I remember reading: a system that was never meant to protect us cannot fail us. We were never in mind when this system was made. We always yell that it fails us but do you know who it really fails? Whites that actually go to jail for killing a black person. Whites that actually go to jail for mass murders. Whites that actually get called a murderer instead of a person that is mentally ill. The system can only fail those it was made to protect. How are we protected by the system when a homeless black woman was just sentenced to 5 years in prison for sending her son to a school that wasnt in “her district” because she wanted her son to have the best education possible? How are we protected when we can’t wear what the fuck we want without being labeled a thug? How are we protected when we can’t even put our hands up to surrender without getting shot 7 more times? Even those in fucking war know what surrender looks like & they accept it as a friendly quit. The system works when it FAILS us and PROTECTS them. That’s what it was made for. Don’t be sincerely ignorant. Because the most dangerous thing that can come from that is thinking the system is for you and not against you and you setting your expectations accordingly.

One of my Howard U sisters was able to cover a lot of the things going on in Ferguson via Instagram before she suffered a shot to the head. On one of her pictures, the caption was a conversation between an officer and a protestor. The protestor spoke of the possibility of something like this happening to his son. His response was, “no that wouldn’t be my son” as he smiled in the picture. He said so much in 6 words. By saying that he said:

In 1791, when the first 10 amendments to the constitution was made, it was made to be remembered as long as it works in authority’s favor because whenever police are totally violating those they are supposed to protect, suddenly it’s just something that sounds good. Even if you are white, Freedom of Speech becomes a crime when you are saying those that are supposed to protect are in fact hurting people. Even if you are white, Freedom of Press becomes a crime when you are telling the world the land of the free is actually the land of the chains. Mental chains, physical chains, emotional chains, etc. You cannot call this land of the free when basic rights are easily overlooked. You cannot call this the land of the free when black boys are stuck in survival mode from the time they come from between a woman’s legs to the time they’re laying in a casket. You cannot call this land of the free when you make college costs so high it becomes no more than a dream to some. Because if you’re ONLY getting by, you have to decide which one of your children get to go to college. & when you dont even have that choice you have to decide between housing and education. Food and education. Clothes and education. Spend time with your family or work long hours to pay for education. Everyone knows education is power. Those that already have money are the only ones that are able to pay to gain the power that can get them more money. While those that that do not have money will never have the chance to get any because the power of education is unaffordable. DOES THAT MAKE ANY FUCKING SENSE?  Why the fuck does education cost more than shoes, clothes, food, etc. It’s okay to be fly as fuck and dumb in this country. I’ve alwayssssss said there’s nothing more powerful than an educated, black man. They’re unstoppable. Untouchable. UNFUCKWITTABLE. Everyone knows that even when or if black men dont realize it. I’ll believe the myth of Big Foot before I believe the myth of the USA being the land of the free.

These are pictures from Bangkok, Palestine, Egypt, Istanbul, Brazil and Ferguson, Missouri. Whenever you are unable to tell the difference between which countries are at war and which one is just showing a protest in response to an unarmed teen being killed, we should conclude that police are abusing their power, ignoring our rights, and truly believing we are terrorists invading their land. “There’s a reason why you separate military and the police: One fights the enemy of the state while the other serves and protects the people. When the military becomes both then the enemies of the state tend to become the people.” Although it’s sad, it shows that even though they may not respect us, or love us they fucking fear us. That should tell you that even if you aren’t able to recognize the power of having more melanin than the next, others recognize it.

So what do we do now? If you feel helpless, don’t. If you feel useless tighten up. Look below then tweet, repost, put petition links in bios if you can’t join the protest in Ferguson. As long as you are reading this you can continue the life of Mike Brown. WE ARE ALL MIKE BROWN. It could’ve been me. It could’ve been you. It could’ve been your brother. Your sister. Mike Brown’s body was left lifeless for 4 hours in the middle of the street. At that very moment we all became one. Strangers became shoulders to cry on. Residents became activists. Neighbors became brothers. This is not the time to blame black people for this. This is not the time to say black men aint shit. This is not the time to say, “I need a white boyfriend cause Tyrone being a fuck boy.” This is NOWHERE NEAR the time to say, “well we kill each other all the time” because there’s no such thing as black on black crime. Crime is crime. This is not the time to say, “well maybe if we didn’t name our children Ladavious and Laquisha they wouldn’t target us.” “Maybe if we dressed appropiately they wouldnt kill us.” STOP JUSTIFYING WHY WE’RE TREATED LESS THAN HUMAN. How we carry ourselves should NEVER determine if we should be treated like human beings or not. Because guess what, “dressing the part” couldn’t even keep Dr. King alive.

Watch the video: The story from Mike Brown’s friend.

SIGN THE PETITION REGARDING THE PASSING OF THE MIKE BROWN LAW THAT REQUIRES ALL POLICE TO WEAR CAMERAS: Please sign the petition for Mike Brown Law!

The Unlearning Process: The Miseducation Of Men, Women, And Sex